Explore Old Delhi's street bazaars, food carts, landmarks, and take a rickshaw ride on this half-day tour. Learn about the rulers and empires of Delhi's past while visiting historical monuments and getting a taste of modern Indian culture. Food tasting, rickshaw ride, and round-trip transportation from your Delhi hotel included.

Old Delhi Private tour begins with pickup at 02:00 PM and you will then proceed with a drive to Chandni Chowk in Old Delhi. It is the oldest and busiest market of Old Delhi. You will then visit Dariba Kalan – an ancient marketplace from where the Mughal women bought ornaments. This market got its name from the Persian word Dur-e be-baha meaning an “unparalleled pearl”. It is filled with tiny little shops specializing in jewellery made of gold, silver, diamond and semi-precious stones.

Next, you will head to the land of spices known as the “Khari Baoli” built by one of the wives of Shahjahan – Fatehpuri Begum. Earlier, it was a step well and now it is a busy marketplace dotted with shops selling a plethora of spices. It also has many shops selling unimaginable types of red chillies, imported dryfruits and rarely found herbs. Don’t forget to keep your camera lens ready to capture some amazing vistas of this market.

After taking in the spicy aroma of Khari Baoli, you will head to Kinari Bazaar – a paradise of designer clothing, jewellery and accessories, which you won’t find anywhere else in Delhi. This market has a wide collection of wedding clothing for both men and women with zari (golden or silver embroidery), lace work, sequins and so much more. Infact, this is not just a market but also a supplier to high end fashion houses in Delhi.

Now your Old Delhi rickshaw tour takes a historical turn with a visit to Ballimaran. Its name is derived from “Balli” meaning the boat of the oars and “Maran” meaning the act of rowing the oars, since this place was owned by a Mughal boatmen. The long-winding streets here have a rich cultural baggage. It has the “Ghalib ki Haveli” where Mirza Ghalib (a 19th century legend of Mughal poetry) once lived. After the demise of Mirza Ghalib in 1869, the Government acquired this Haveli and turned it into a museum.

Later, you will visit the Fatehpuri Masjid built by Fathehpuri Begum (one of the wives of Shahjahan). Built in 1650, this beautiful edifice witnessed the historical events of the Mughal and British era. This colossal mosque has beautiful fountains and a four-step water tank made of marble where devotees halt for ablution before reciting the holy prayers.

Your tour now ends with a visit to Jama Masjid, considered to be the largest mosque in India. It’s time for you to explore the mystical charm of this beauty. Built in 1656, this mosque was an effort of 5,000 artisans and it took around 6 years to complete. It has an ancient copy of the Quran inscribed on deer skin. As per folklore, the walls of this masjid is slightly tilted so that the walls fall outwards, in case of earthquake. Thousands of Muslim devotees gather here on the Eid-ul-Fitr festival to recite Namaz (holy prayers of Muslims) in the name of Allah.

After a soul-filling experience of Old Delhi, you will return to the hotel. 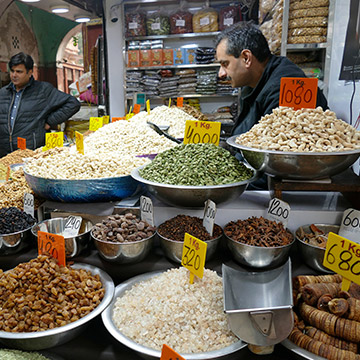