Madurai and Rameshwaram are two of the most important cities of Tamil Nadu, famous for coveted Hindu temples, regarded auspicious. Devotees pour in round-the-year, though the number goes up in winters. Temple towns of Kanchipuram and Mahabalipuram in Tamil Nadu are known for their enigmatic architecture. Panch Rathas at Mahabalipuram named after Pandavas from the epic Mahabharata is enlisted as UNESCO World Heritage Site. Chennai’s beaches, church usher in a magical aura. 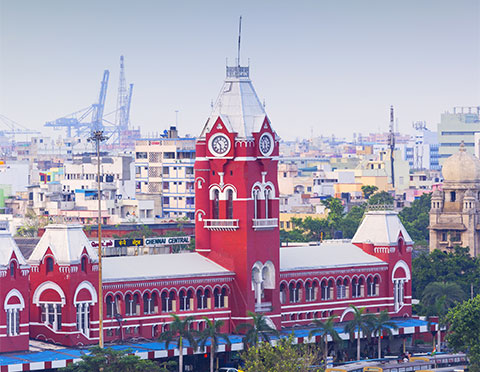 On arrival at Chennai airport, our representative will meet you and transfer you to the hotel. Rest of the day is free at leisure. Overnight stay in Chennai.

Chennai, formerly known as Madras, is the largest city and current capital of Tamil Nadu. Located on the Coromandel Coast of the Bay of Bengal, it is one of the major cultural, economic and educational centres of South India. This city has been a perfect keeper of artistic, religious and culinary traditions of South India alive over the years. 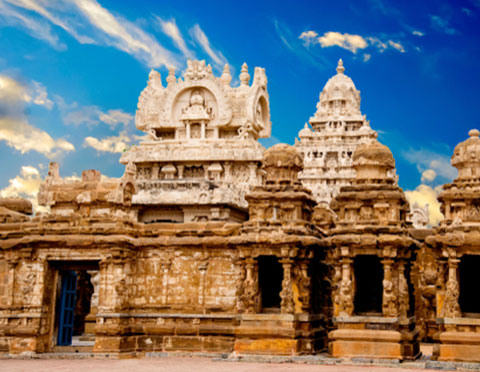 After breakfast, check out from the hotel and drive to Thiruvannamalai. En route visiting Kanchipuram. Enjoy a half-day tour of Kanchipuram. Known as the town of a thousand temples, Kanchipuram is one of the seven sacred cities of India. Visit the Varadharaja Perumal Temple, dedicated to Lord Vishnu, originally built in 1053. It is the third most important of the 108 holy shrines of Vishnu. There is a hundred-pillar mandapam or hall in the temple, full of sculptures exhibiting excellent workmanship and architecture. Visit the Kamakshi Temple, dedicated to Kamakshi, one of the forms of the goddess Parvati. It is popularly associated with Sankaracharya, one of the greatest Hindu gurus. This is the only Parvati temple in Kanchipuram. Later, visit the Kailasanatha Temple. Dedicated to Lord Shiva, this temple is one of the finest structural constructions of the Pallava ruler Rajasimha, and features particularly fine car. 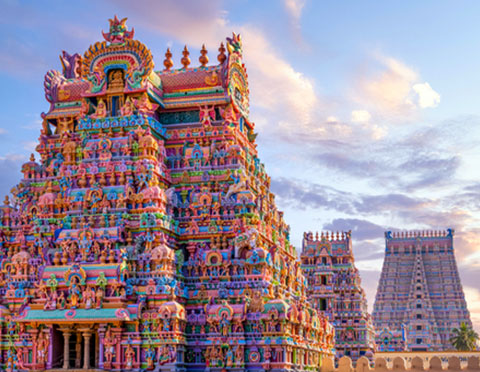 After breakfast, check out from the hotel and drive to Trichy. Upon arrival, check in to the hotel. Later, enjoy a half-day tour of Tiruchirappalli (Trichy), situated on the banks of the river Cauvery. The town and its fort were built by the Nayaks of Madurai. Visit the Rock Fort Temple, a spectacular monument perched on a massive rocky out crop which rises abruptly from the plain to tower over the old city. At the very top is the ancient temple dedicated to Ganapati. Continue your tour with a visit to Srirangam … the foremost of the eight self-manifested shrines of Lord Vishnu. It is also considered the most important of the 108 main Vishnu temples (Divyadesams). The temple complex covers 156 acres of land, and comprises seven concentric walls, and twenty one gopurams or towers. Non Hindus are not allowed the innermost sanctum of the temple. Evening is at leisure. Overnight stay in Trichy. 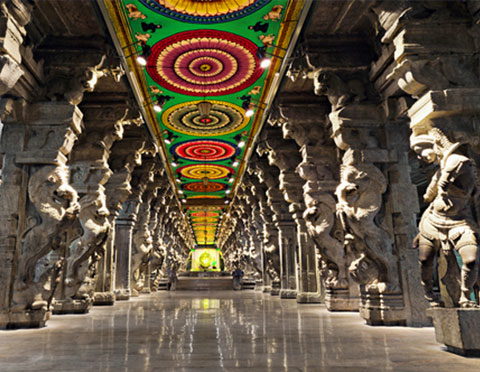 After breakfast, check out from the hotel and drive to Madurai. Upon arrival, check in at a hotel and relax. Later in evening enjoy witnessing evening Aarti at Shree Meenakshi temple. Overnight stay in Madurai. 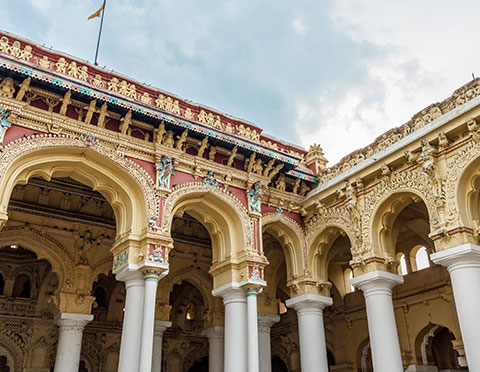 Today, enjoy a full-day tour of Madurai. Situated on the banks of river Vaigai, Madurai was the capital of the Pandya kings, and an important cultural and commercial centre as early as 550 AD. Visit the Meenakshi Temple- the heart and lifeline of the 2500 year old city of Madurai. The complex houses 14 magnificent Gopurams or towers, including two golden Gopurams for the main deities. Next, visit the Gandhi Memorial Museum at the Tamukkam Palace. The museum houses the history and relics of the freedom movement. Proceed to the Palace of Tirumalai Nayak, an Indo-Saracenic building constructed in 1523. It was built with the help of an Italian Architect and is a classic fusion of Dravidian, Islamic and European styles. Continue to the Koodal Azhagar Temple, one of the 108 temples dedicated to Lord Vishnu. Three separate altars feature three figures of Vishnu, in standing, sitting and reclining postures. In the evening, re-visit the Meenakshi Temple to witness the evening prayer ceremony at the temple. Overnight stay in Madurai. 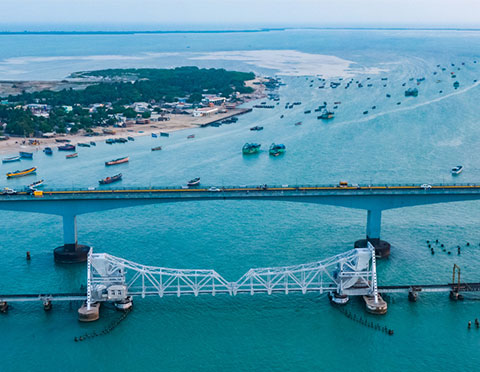 After breakfast, check out from the hotel and drive to Rameshwaram. Rameshwaram is one of the holiest places in India and is located on a beautiful island. It is separated by a small Pamban channel from Sri Lanka. According to the Hindu mythology, this is the place where Lord Rama created a bridge across the sea to Sri Lanka. Upon arrival, check in to the hotel and relax. Later, visit Rameshwaram temple; Hanuman Temple and Agneetirtham. Overnight stay in Rameshwaram. 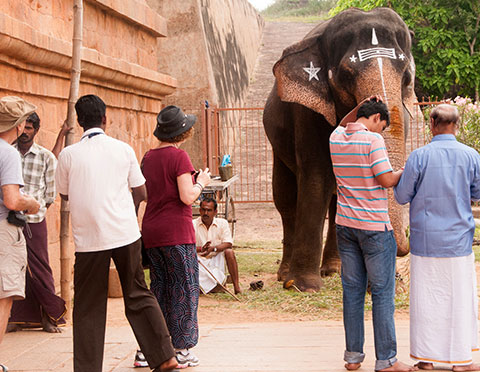 After breakfast, check out from the hotel and drive to Thanjavur. Upon arrival, check in to the hotel and relax. Evening at leisure for your independent activities. Overnight stay in Thanjavur. 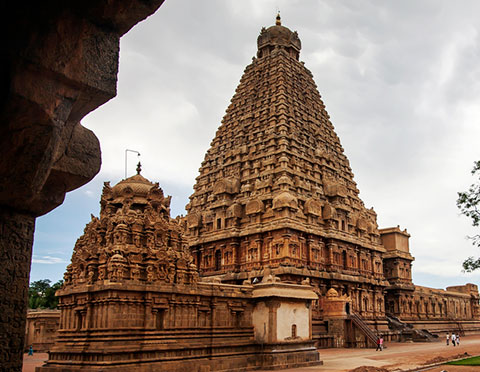 After breakfast, proceed for the full-day tour of Thanjavur…. the centre of Tamil learning and culture. Thanjavur was the royal city of the Cholas, Nayaks and the Marathas, and the original home of Dravidian art and architecture. Visit the Brihadeshwara temple, also known as the Big Temple; it is the crowning glory of Rajaraja Chola’s reign in 1005 AD. The temple a has gigantic lingam cut from a monolithic rock, about 8.7mtrs height. There is a huge Nandi Bull within the inner shrine of the temple… the second largest monolithic Nandi in the country. Continue your tour with a visit to Tanjore Palace & Museum, which houses an art gallery, a library, the hall of music, and the audience hall. On display here are relics of royalty - clothes, hunting weapons, headgear and much more. The other two great Chola Temples in Thanjavur are the Temple of Gangaikondacholapuram and the Airavatesvara Temple. Overnight stay in Thanjavur. 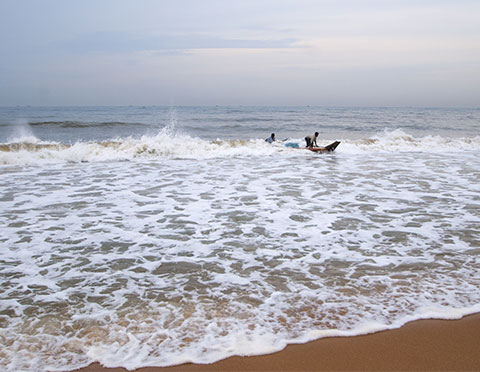 After breakfast, check out from the hotel and drive to Madurai. Upon arrival, you will check in to hotel and relax. Evening at leisure for your independent activities or relax on the beach. Overnight stay in Pondicherry. 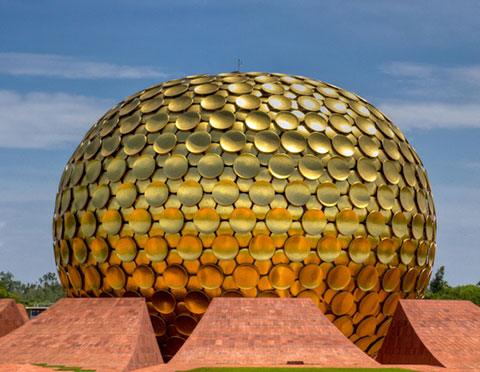 After breakfast, proceed for the full-day tour of Pondicherry. The city is referred to by names such as 'India's Little France' and 'The French Riviera of the East'. This territory was under French rule for around 280 years. It still retains its French flavor, seen in the colonial mansions, beautiful boulevards, promenades, and street names on signboards. Visit the Shri Aurobindo Ashram. This world-renowned ashram was founded in the year 1926, by Shri Aurobindo, a revolutionary turned Yogi from Bengal along with The Mother (Mira Alfassa), a French painter and sculptor. The ashram attracts people from all over the world. Later, visit the Government Museum… this multipurpose museum houses sculptures from Pallava, Chola and Vijaynagara temples. The terracotta figures, amphorae, burial urns, glass beads have been excavated from the surrounding historic environment. Thereafter, drive past the beach promenade. Opportunity for evening French Heritage Walk: The buildings in French section of Pondicherry are an enduring legacy of French history in India. The French Quarter unfolds the saga of a colonial adventures… the historic rivalry between the European powers of the time including the Danes, the Dutch and the British, besides the French. The French Heritage walk takes you through streets that are laid out in a well-planned grid pattern. The buildings in the French section are easily recognizable by their ornate gateways arches, garden courtyards with multicoloured bougainvilleas and the buildings themselves painted in pleasant hues of lime and peach. The walk covers about 2 kms in an hour and a half, and includes the Hotel de Ville, French War Memorial, Romain Rolland Library, Aayi Mandapam, Lycee Francaise, Raj Niwas, Le Grand Hotel d Europe, Ecole Francaise d’ Extreme Orient, Church of Capuchians and parts of the Ashram. Overnight stay in Pondicherry. 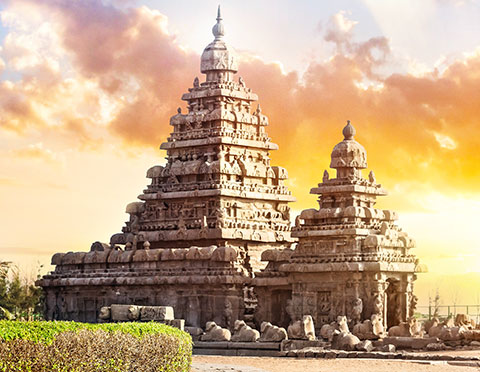 After breakfast, check out from the hotel and drive to Mahabalipuram. Upon arrival, you will proceed for half-day tour of Mahabalipuram. Mahabalipuram lies on the Coromandel Coast, and was a well-established seaport between the 7th and 10th centuries. Visit the Panch Rathas or Five Ratha temples…. of the nine monolithic rock-cut temples found in Mahabalipuram, the most important are these, dedicated to the five Pandava brothers from the epic Mahabharata. The Dharmaraja Ratha is named after the eldest Pandava, and is the largest one in the lineup. It is dedicated to Lord Shiva. Visit Arjuna’s Penance, the massive rock cut bas relief sculpture. It measures 27 meters in length and 9 meters in height, and depicts the story of Arjuna. Later, visit the Shore Temple … a five-storied structure made out of finely cut granite, and one of the earliest and most important structural temples. UNESCO has listed it among the world heritage sites. Later, check in at a hotel and relax. Overnight stay in Mahabalipuram. 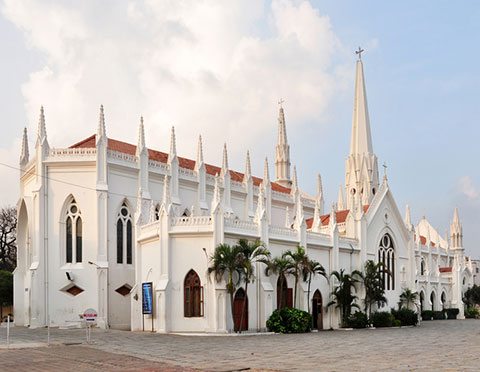 After breakfast, check out from the hotel and drive to Chennai. Upon arrival, check in to the hotel. Later, you will proceed for half-day tour of Chennai. Formerly known as Madras, the city of Chennai is nourished by its rich traditions… classical music, architecture, art and dance form an indigenous part of the city's identity. Visit Fort St George… built in the 17th century, this fort houses St. Mary's Church and a museum. St. Mary's Church is the oldest Anglican Church in India. Visit the Kapeeleshwara Temple, dedicated to Lord Shiva. The Gopuram, or entrance tower, has a profusion of sculptured images depicting stories from Puranic legends. Next, visit the San Thome Cathedral, named after St Thomas, the doubting discipline of Jesus Christ. Located at the southern tip of Marina Beach, it features a beautiful stained glass window at the basilica, depicting the story of St Thomas. Later, drive past Marina Beach, the second longest beach in the world. Overnight stay in Chennai. 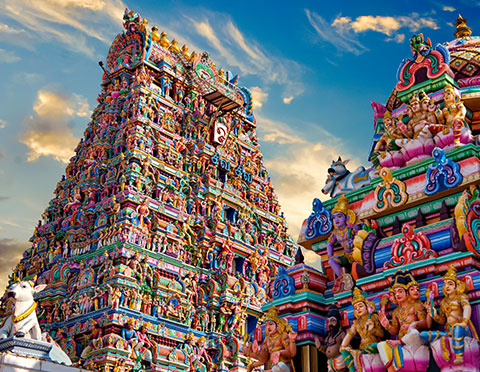 After breakfast, day is at leisure for your independent activities (No vehicle, no guide). Overnight stay in Chennai.

After breakfast, check out hotel and transfer to Chennai airport for onward connection; henceforth our services terminate and we wish you safe, happy journey back your home