An exclusive ‘17 nights and 18 days’ tour of India’s North-East awaits you, offering opportunities to witness one of the most fascinating, unexplored gems of India. You will be travelling to a plethora of interesting and spectacular tourist destinations of the region bestowed with the best of Mother Nature. Your tour starts at Kohima, in Nagaland, where you will see and learn about the local Naga tribes among other awe-inspiring experiences. Visit Shillong, the capital city of the state of Meghalaya, popularly called as the “Scotland of East”. Close to Shillong is Cherrapunjee, one of the wettest places on earth blessed with breathtaking waterfalls and verdant green. Another gem is Guwahati, the largest city of Assam, and dubbed as the “gateway to the northeast”. In this tour you will travel the off-the-beaten-path to discover little known gems such as the traditional living root bridges, the crystal clear waters at Dawki, enticing caves and plunging waterfalls of Meghalaya, the tribal natives of Nagaland and Assam, and ancient temples and the mighty river Brahmaputra of Guwahati; overall, you will experience a breathtaking journey to places that are tucked in the lap of some of the most gorgeous parts of India, in the northeast. 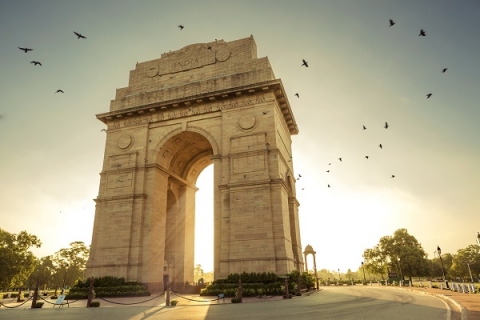 Arrive at New Delhi Airport, after clearing immigration and customs, our representative will meet you at the arrival area and transfer to a hotel near the airport. 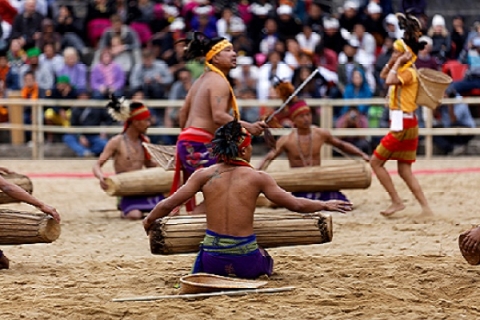 Today, after breakfast, check-out and transfer to the airport for your flight to Dimapur.

Arrive at Dimapur airport, meet our representative at the arrival area and drive to Kohima. On arrival, check-in at the hotel.

Kohima – the state capital of Nagaland and home of the Angami tribe. On arrival, check-in to the hotel.

Evening explore the local market of Kohima by foot.

The picturesque town of Kohima is the home of the brave and daring, yet simple and innocent, Naga tribes. Lapped in the eastern frontiers of the Himalayan mountain range, Kohima is marked by an unhurried pace of life, calm and serene environs and fresh, unpolluted air, which make a welcome change for a jaded city dweller. A typical Naga town, it depicts the exotic tribal culture of the northeast and offers a panoramic view of the neighbouring hills. 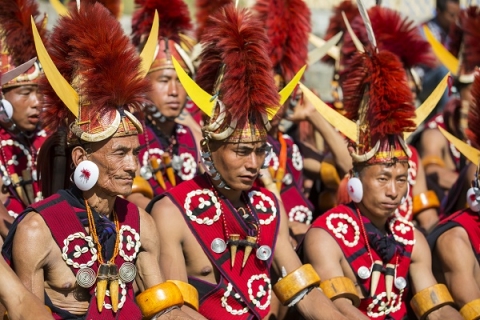 After breakfast, visit 2nd World War Cemetery, State Museum. Later take an excursion to Khonoma – the green village. Khonoma is an Angami-tribe warrior village that is known for its battles with the English and for its leading role in the Naga freedom struggle. In recent years Khonoma has become famous for its community-based conservation projects and eco-friendly tourism initiatives. 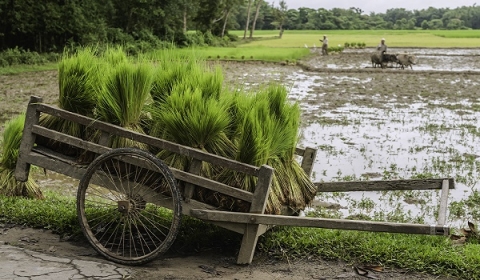 After breakfast, check-out and drive straight to Jorhat. En route, drive through the roads passing through tea estates in Jorhat. Make a halt and visit a tea plantation. The largest producer of tea from India, Assam is famous the world over for its popular "Assam Tea" tea that is strong and malty. 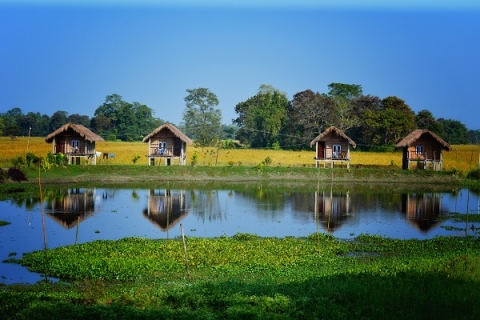 After breakfast, check-out from the hotel and drive towards the ferry station in Jorhat. After boarding our waiting ferry, we shall cross the mighty Brahmaputra River to reach Majuli - the largest river island of the world also the cultural capital of Assam. On arrival, board the waiting car and visit Anuati sattras (monasteries) and Uttar Kamalabari sattras. Interact with the monks and visit monk's quarter. Later, drive to Kamalabari ghat in Majuli and cross the Brahmaputra River.

On return to Jorhat, you will drive to Kaziranga – the only natural home to the imposing one-horned Rhinos in the world. On your arrival, check-in to the resort.

Kaziranga National Park a UNESCO World Heritage Site famous for the Great Indian one-horned rhinoceros. The landscape of Kaziranga is of sheer forest, tall elephant grass, rugged reeds, marshes & shallow pools. It has been declared as National Park in 1974. Kaziranga National Park is one of the last areas in eastern India undisturbed by a human presence. It is inhabited by the world's largest population of one-horned rhinoceroses, as well as many mammals,including tigers, elephants, panthers and bears, and thousands of birds.

There will be a reduction of USD 150 per person for 01 night less stay, between May and October. 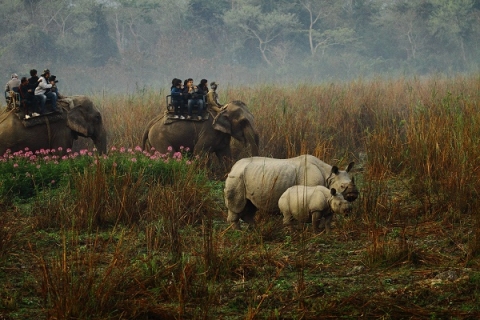 Early morning you will go for an Elephant ride. Elephant ride is the best way to explore and unfold the vigour and charm of the enchanting wildlife of the park. Return to resort for your breakfast.

Afternoon go for a Jeep safari in the Western range of the park.

Return to the hotel by evening. 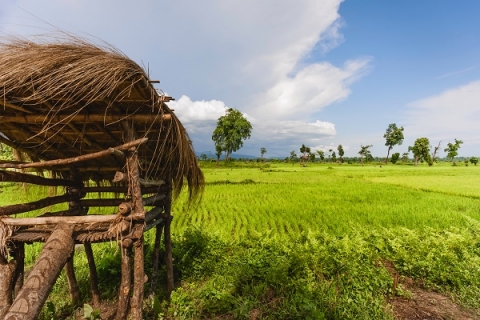 After breakfast check out from hotel and drive to Bhalukpong. Enroute stop in the little town of Tezpur to visit Da Parbatia – the 6th-century rock craving of a temple gate, later visit Cole Park – to see the historical relics like the inscription of Bhomoraguri, and two massive and well-decorated stone pillars have been brought in from the Bamuni hills. On arrival, check-in to the hotel. 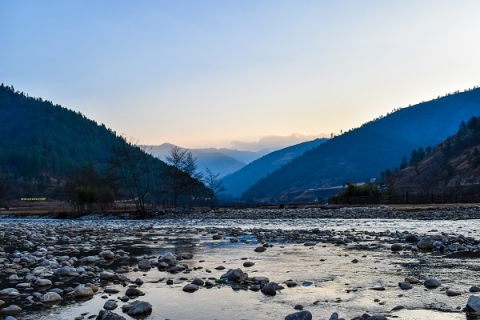 After breakfast, check-out from hotel and board on your vehicle. En- route visit Tippi Orchid Center, an important tourist destination is the area, that houses a large number of species of orchids. Evening arrival at the little town of Dirang. Check-in to hotel on arrival.

Dirang is a beautiful hill station comprises of Tribal Mahayana Monapas sharing their traditions and heritage which are similar to Western Bhutan. Due to its low altitude than other places in Arunachal Pradesh the weather is much milder and comfortable; a constant wind blows along the river valley making it a very pleasant place to stay. 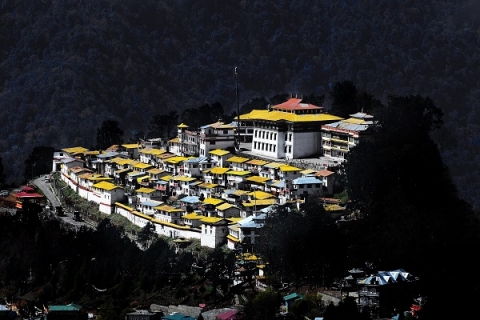 Today our drive will be on a different terrain making the journey a lot more strenuous than it should be. The mountains here are not just any mountain; but they are giant ones, brownish with trees at the base and rocky parched peaks. En route visit Dirang Dzong or Dirang fort, which was built in the 17th century to protect Bomdila from the neighboring states. In fact, during the infamous Vietnam War, the fort was used as a jail and in World War period, this fort was used as a shelter. The entrance wooden gate is decorated with local architectural designs and is definitely an eye-catcher.

We shall pass the Sela Pass – lying at an altitude of 13400 ft above sea level, this pass is counted amongst the high altitude motorable passes. Do not miss the most mesmerizing views of the snow-clad mountains. After a short tea break, we shall resume our journey towards Tawang town. On arrival, check-in to the hotel. 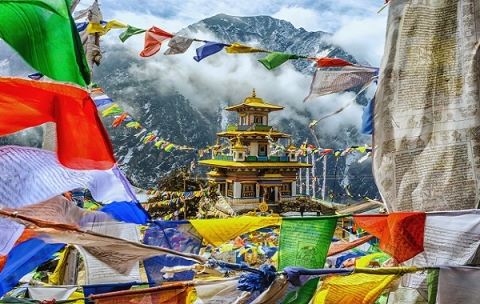 This morning we shall visit the famous Gaden Namgyal Lhatse popularly known as Tawang Monastery found around 1680 – 81. This monastery is the largest of its kind and is one of the largest monasteries in Asia. Later visit Tawang War Memorial, multi-hued memorial, has a structure constructed in stupa design. Dedicated to the martyrs of the Sino-India War held in 1962. Urgelling Monastery – the birthplace of 6th Dalia Lama. 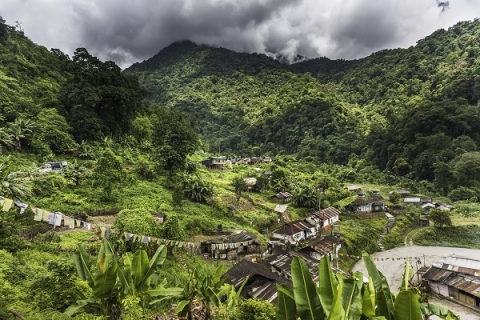 After breakfast, check-out from the hotel and drive to Bomdila. En-route, visit the wonderful Jang Falls. On arrival, check-in to the hotel.

Evening you can roam around the local market of Bomdila. 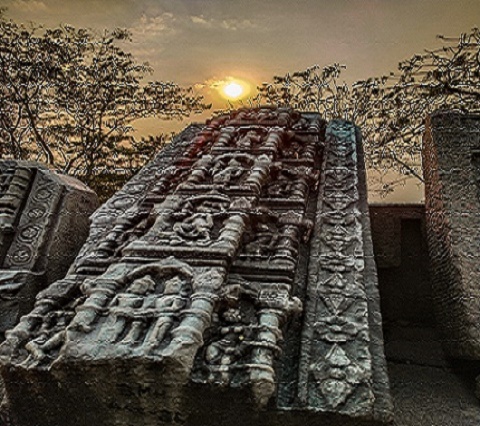 After breakfast, Check-out from hotel and drive to Tezpur. En route visit Upper and lower Gompa. On arrival, check-in to hotel. 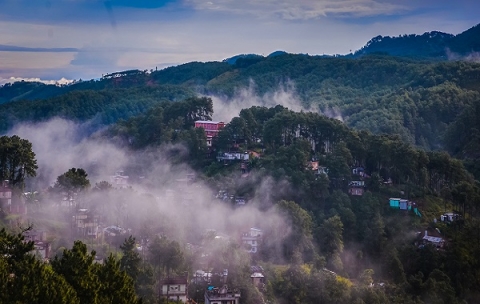 This morning, after breakfast we set off towards Shillong en route stop at Umiam Lake – enjoy the fascinating view of the lake. Shillong became the first capital of the State of Meghalaya. Located in undulating pine-covered hills, the city has a milder climate than tropical India. Home to several waterfalls, Meghalaya is also known as the “Scotland of the East”. The British legacy is still visible in the architecture and food habits of the population. 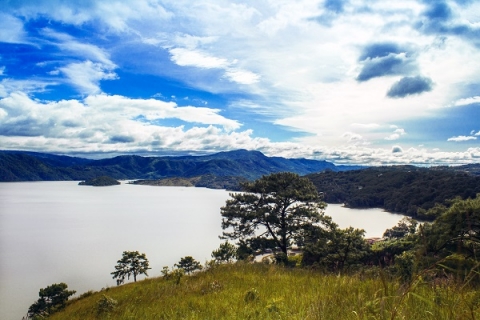 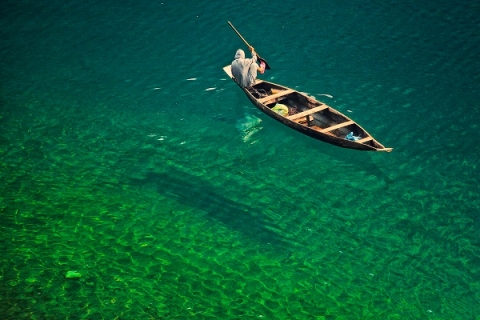 After breakfast, check-out and visit Mawlynnong and Dawki.

On arrival, check-in at the hotel. 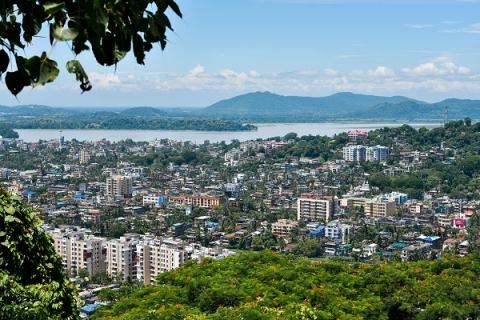 Then check-in at the hotel. 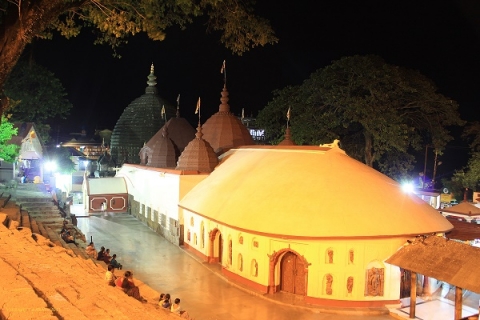 After breakfast, visit the revered Kamakhya Temple, Nabagraha Temple and Umananda Temple at the Peacock Island (by ferry). Afternoon, excursion to the famed Sualkuchi Silk Village. One can see weaving/handmade fabrics in the villager’s house. Evening go for an hour cruise on the mighty Brahmaputra River.

Note: River cruise is subjected to availability and river conditions.***

After breakfast, check-out, and transfer to Guwahati airport for your flight back to home.