This tour will whisk you away to Tamil Nadu and Kerala - also called God's own country. A visit to Tamil Nadu offers an enchanting experience, which will leave you awed with its magnificent architecture, rich culture and exotic places. Be it beautiful beaches, magnificent rock-cut temples with marvelous architecture, Tamil Nadu has something to offer for every traveler. This tour traverses through attractions of Tamil Nadu and Kerala that will make your trip a memorable one. The origin of Tamil Nadu dates back to 6,000 years and was ruled by three dynasties - the Cholas, Cheras and Pandyas, prior to the Christian era. Kerala, dating back to 4000 B.C., is believed to be formed by Parashuram, one of the avatars (incarnation) of Lord Vishnu. During this tour, gain splendid experiences of the exotic wildlife, lush tea and coffee plantations, dreamy backwaters and lots more. This tour offers an exhilarating experience of Kerala that you will cherish for a lifetime. 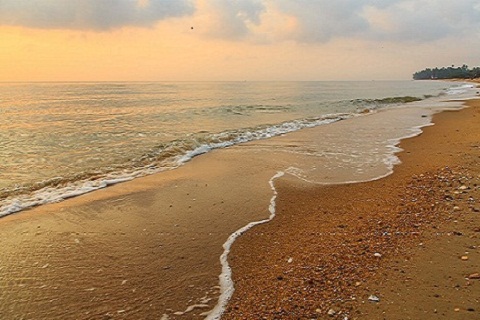 On arrival at Chennai airport, our representative will meet you and transfer you to the hotel. You can spend the rest of the day free at leisure.

Chennai: It is formerly known as Madras, is the largest city and current capital of Tamil Nadu. Located on the Coromandel Coast of the Bay of Bengal, it is one of the major cultural, economic and educational centers of South India. This city has been a perfect keeper of artistic, religious and culinary traditions of South India alive over the years. The best time to visit Chennai is between October-March as the weather is moderate during this time.

This day you will be driven from Chennai to Mamallapuram, also known as Mahabalipuram or Mamallapattana.

Mahabalipuram: is a UNESCO World Heritage Site located on a bank of Bay of Bengal. It is renowned for its various stone-carved monuments and ancient temples dating back to the 7th & 8th centuries - mainly developed during the reign of the Pallava Dynasty (275 CE to 897 CE).

On arrival, check-in at the hotel. Today we will proceed with Mahabalipuram sightseeing tour covering visits to the rock-cut temples and Mandapams (pavilion for public rituals) depicting incidents of the legends, Hindu epics, and mythology. Visit the Panch Ratha (chariot-shaped) temples built during the reign of the Pallavas dynasty. These five temples are named after the five Pandava brothers and their wife Draupadi in the great Indian epic Mahabharata. Visit the Arjuna's Penance, a magnificent relief carved out in the mid-17th century that depicts the austerities performed by Arjuna (one of the Pandava brothers) to obtain Lord Shiva’s weapon (Trishul). Next, head to the Shore temple - a UNESCO World Heritage Site - built in the 7th century built by Pallava King Narasimhavarman II depicting the royal grandeur of the Pallavas dynasty. It comprises of three temples - one dedicated to Lord Vishnu and the other two dedicated to Lord Shiva.

In the morning, you will be taken to Pondicherry. On arrival, check-in at the hotel.

Pondicherry: Pondu, Pondicherry or Pondicherry was under the rule of French till 1954. This is why it is considered a French colony in India that showcases colonial heritage with streets dotted with yellow-walled houses and authentic street-side French cafes. This vibrant city - with a spiritual touch, French-style architecture, breezy shores, and tranquil air - welcomes you with all the love.

On arrival, check-in at the hotel. After some relaxation, go for a Pondicherry sightseeing tour. Visit the Sri Aurobindo Ashram and Auroville. Auroville: A universal town where people of all nationalities follow the principle of harmony and peace. Also, visit the Sri Ganesha Temple and Manakula Lord Vinayagar - famous Hindu temples in Pondicherry. 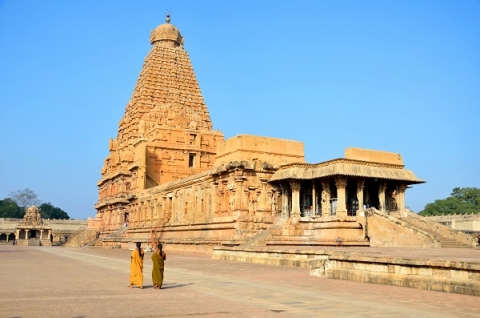 In the morning, drive to Thanjavur also known as Tanjore. On arrival, check-in to the hotel.

Thanjavur: Thanjavur was one of the capitals of the Chola dynasty (one of the longest-ruling dynasties of South India). It is famous for Tanjore paintings and Bharatanatyam classical dance performances. It has been an important center of religion, art and architecture, silk weaving and most of the Chola dynasty temples are present here.

Later, proceed with the Thanjavur sightseeing tour with the first visit to the Brihadeeshwara Temple - the first-ever all Granite temple in the world. This temple, a UNESCO World Heritage Site, was built during the Chola Dynasty, which captured Tanjore in 850 A.D, in 1010 AD. The presiding deity here is Nataraja (the dance form of Lord Shiva) and Nandi (Lord Shiva’s vehicle). Striking features about this temple is that it doesn’t cast shadow on the ground at noon and there are musical pillars within the temple that create music when tapped. Next, visit the Thanjavur Palace - the official residence of the Bhosle family that ruled Tanjore between 1674 and 1855. Within the palace, you will see the Sadar Mahal Palace, the queen's courtyard, the Durbar Hall, Raja Serfoji Memorial Hall and don’t miss out on the Royal Palace Museum displaying sculptures, weaponry, and elephant bells, etc. 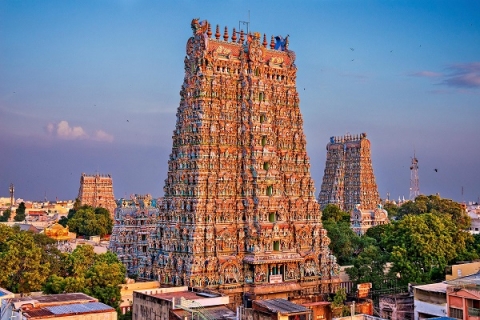 After breakfast, drive to Madurai.

On reaching, check-in at the hotel. After some relaxation, go for the Madurai sightseeing tour with the first visit to the famous 1000-years old Meenakshi temple where Goddess Meenakshi, a form of Goddess Parvati and Sundareshwarar (a form of Lord Shiva and consort of Goddess Parvati) are worshipped here. This temple was among the top 30 nominees for the "New Seven Wonders of the World". Next, visit the Thirumalai Nayak Palace, a 17th-century palace that displays a beautiful fusion of Dravidian and Rajput architecture style built by King Thirumalai Nayak (1623-1659) as his royal residence. Visit Vandiyur Mariamman Teppakulam - a small water tank that has underground channels with the River Vaigai. It has a 2000-years old temple, dedicated to Lord Vigneshwara, in the center.

After breakfast drive to Periyar. On arrival, check-in to the hotel.

Periyar: Periyar is a landscape, set amidst the Western Ghats, in Kerala that entices its visitors with its rich biodiversity and natural vistas. It is famous for its Wildlife Sanctuary, which is considered to be one of the major tiger reserves in India. Nestled in the Western Ghats, Periyar is blessed with exotic wildlife and scenic charm. 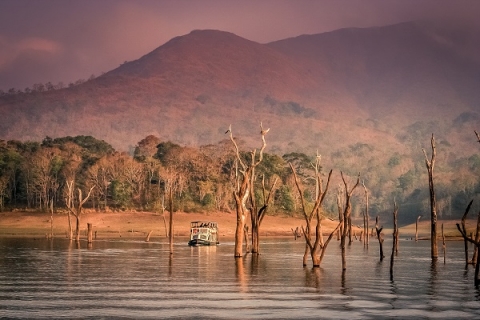 After breakfast, visit the popular Periyar Wildlife Sanctuary - a reserve of Bengal tigers, Indian elephants, Wild Boars, Tigers, Leopards, etc. It has an around 100-years old artificial water lake where you can sight tigers, baby elephants and a couple of other animals in a playful mood. Here you will go for a boat ride (Optional) at the Periyar Lake to capture rich glimpses of wildlife, tea/coffee, and spice plantations, etc. 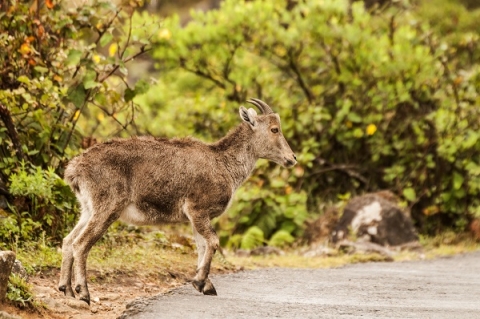 In the morning, drive to Munnar. On arrival, check-in at the hotel.

Munnar: a beautiful hill station named after three rivers, Madhurapuzha, Nallathanni and Kundaly located on Kannan Devan Hills. It is a popular honeymoon destination in Kerala and offers spell bounding views of vast plantations of tea and spices. It also boasts the highest peak in South India - Anamudi. Munnar is surrounded by various wildlife sanctuaries that house the grizzled giant squirrel, elephant, gaur, Nilgiri Langur, Sambar, etc. Every year, tourists visit here for Neelakurinji - a blue flower which blooms once in every 12 years.

Today, go on a sightseeing tour of Munnar with the first visit to the Tea Estates. Munnar is a city renowned for its bountiful tea plantations nestled amidst pristine nature. Walkthrough these sprawling tea estates and soak yourself in the refreshing aroma of the tea leaves. Here you can also visit the Tea Museum that showcases old photographs and huge machinery that has been used in tea processing over the years. Also, get a first-hand experience of how tea is processed. Eravikulam National Park: Eravikulam National Park is a must-visit attraction located in Munnar. It is the first of its kind in Kerala that is home to the exotic Nilgiri Tahr (mountain goat) and various other endangered species. A flower called Neelakurinji which blooms once every 12 years is also another attraction at Eravikulam National Park. Mattupetty Dam: A concrete gravity dam constructed between 1949 and 1953 for the purpose of conservation of water and hydroelectricity generation. The captivating reflections of the surrounding tea gardens falling upon the still water are the best part of this dam. 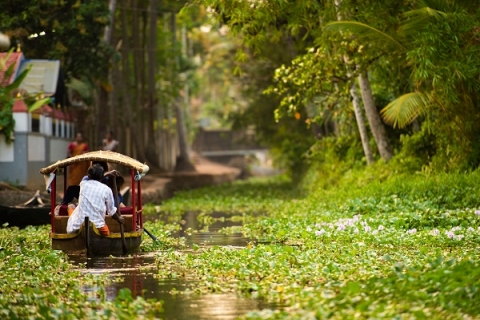 After breakfast, drive to Alleppey.

Alleppey: It is also called the 'Venice of the East', is located in the Alappuzha district of Kerala. This is a place where you can book an overnight houseboat stay and enjoy a relaxing ride and overnight stay floating across the brilliant views of Kerala’s village life, lush green paddy fields and coconut lagoons.

On arrival, board the houseboat. After registering, customers will receive a traditional welcome drink. As your houseboat rides through the backwaters of Alleppey, you will be served lunch, evening snacks with tea/coffee and dinner on the go. The boat will be anchored near a village for the night since cruising is not possible during the night as during this time as the local fishermen put their nets. 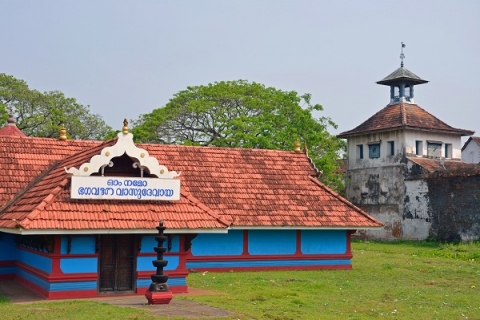 After breakfast, drive to Kochi.

Kochi: It is also known as Cochin, is a beautiful city in the Ernakulam district of Kerala. Over the years, the history and development of this city carries stubborn marks of the British, Arabs, Chinese, Dutch, and Portuguese. It is undoubtedly the best starting point on your discovery to capture the beauty of God’s own country - Kerala.

On arrival, check-in at the hotel and later proceed for a half-day Kochi city tour. Places to visit include the Dutch Palace at Mattancherry, Jewish Synagogue at the heart of what is locally called the Jew Town, St. Francis Church, the oldest European church in India, Santa Cruz Basilica, originally built in 1557 by the Portuguese. Pass the Chinese Fishing Nets which are large nets cantilevered overhang that would have been made to Kochi by Chinese traders. In the evening, visit the cultural center and watch the show of classical Indian dance (Kathakali), which is a must-see in Cochin.

Enjoy a leisurely breakfast this morning. Later, you will be transferred to the airport for your onward journey depending on your flight time. We hope you had a good time exploring with us.