This 6-Day Taj Mahal with Colours Tour will be taking you through popular destinations of India – New Delhi, Mathura, Vrindavan, and Agra. Also, on this tour, get a lifetime opportunity to celebrate Holi - The Festival of Colours. Delhi will surprise you with its interesting mix of history, art, culture and architectural wonders from the ancient and the modern era. Explore Mughal era architectural wonders in Agra. Moreover, discover India’s famous UNESCO World Heritage Sites, watch the dazzling sunrise over the Taj Mahal, enjoy a Rickshaw Ride in the streets of Old Delhi, get Henna tattoo in Delhi, a Boat Ride on Lake Pichola in Udaipur among an array of other lifetime experiences. The highlight of this tour is Holi, India’s very popular Festival of Colours. A vibrant sea of colours, culture, unique traditions and many other experiences waits for you in Mathura and Vrindavan, the two legendary places associated with Holi. 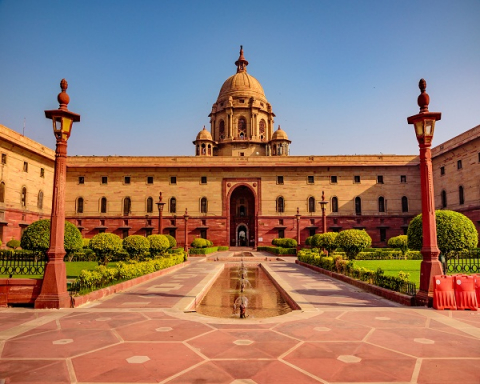 Upon arrival at Delhi International Airport, our representative will meet you and assist you in your transfer to the hotel. New Delhi, the capital of India, is a fusion of the ancient and the modern. The capital city, Delhi, unwinds a picture rich with culture, architecture, human diversity, history, monuments, museums, galleries, gardens and exotic shows. Comprising of two contrasting yet harmonious parts, the Old Delhi and the New Delhi, the city is a travel hub of Northern India.

This morning after breakfast, do a full-day guided city sightseeing tour of Delhi. Delhi sightseeing tour begins at Old Delhi with a visit to the 350-year-old and the largest mosque in India - Jama Masjid. Next, proceed in a rickshaw to Chandni Chowk, exploring one of the oldest, biggest and the busiest markets in India. The rickshaw ride halts at the Red Fort (a UNESCO World Heritage Site), a massive Mughal era red sandstone monument. Here, our driver will pick you up and drive you to Raj Ghat - the memorial dedicated to Mahatma Gandhi. Next, proceed to the Humayun’s Tomb (a UNESCO World Heritage Site), a memorial to the 2nd Mughal Emperor, Humayun. Later, drive past the Rashtrapati Bhawan (official residence of the President of India) and India Gate (a War memorial dedicated to the Indian & British soldiers who died in World War-I). Sightseeing in Delhi ends with the visit to Qutub Minar (a UNESCO World Heritage Site), world’s tallest brick minaret that was built in 1192. Also, get a Henna Tattoo applied as a memorable souvenir from India. 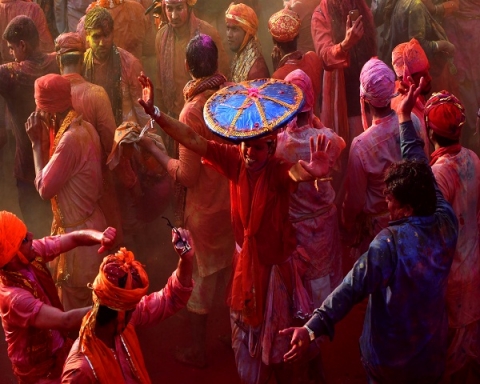 Today morning check out from the hotel and drive towards Mathura. Upon arrival, check-in to the hotel. Post noon get ready to explore the city and famous temples such as Lord Krishna Birth Place Temple, Dwarkadhish Temple, Iskon Temple and other temples. Evening spend your time on Vishram Ghat and Keshi Ghat. Overnight stay at the hotel in Mathura. 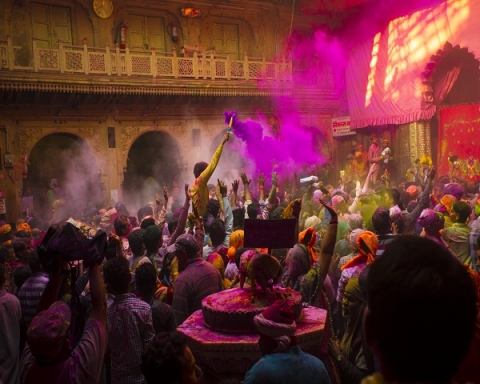 Holi festival is the most unique feature of Mathura and its celebration continues for entire month during Holi time. Artist, Celebrities, Film Stars and people across the world come to experience it. It covers the whole Brij Bhoomi, from Gokul, Vrindavan, Barsana, and Nandgaon to Mathura. Post breakfast get ready to play Holi. Every year there will be a fix date for Holi Celebration and it has been celebrating on different dates and places. Here are the famous places where you can enjoy Holi as per your time:

This is celebrated at Shriji Temple. People come at the temple premises and throw Laddu (sweets) on each other with colours. They sing songs and dance together. Devotees shower flowers on the idols of Lord Krishna and Radha Ji. It’s the traditional way to celebrate it with natural colours and flowers.

One day after the Laddu Holi the local people celebrate Lathmar Holi which is the most popular in all places known as “Lathmar Holi”. Here, ladies beat the man by bamboo sticks during play and demonstrate their power. It also promotes women empowerment. As per the story, it is said that Lord Shri Krishna used to come to Barsana with his friends to play Holi with Radha ji, but she and her friends took bamboo sticks known as “lath” to chase them away. The tradition gained popularity and has taken the form of a ritual. Now in the present time, men from Nandgaon visit Barsana and the ladies shove them off with bamboo sticks. You can also play it with your loved ones or see it, feel it.

One day after Barsana Lathmar Holi, the villagers of Nandgaon celebrate it. The boys from Barsana reach Nandgaon and now its turn of Nandgaon ladies to lead and play Lathmar Holi with the boys of Barasana. People shower colors on each other, eat sweets and other delicious items, and a large gathering immersed in this lovable game where women attack men and men while saving themselves try to color them.

This is celebrated after Nandgaon Holi at the famous temple of Banke Bihari with the traditional and natural way by colours, gulals, and sweets distributed during the celebration.

The same day people of Mathura celebrate the Holi. The main temple of Mathura hosts the festival and many cultural programs are performed there. Artists play the role of Shri Krishna and Radha Ji and throw colour on each other. The environment is filled with colours of love. They also play Lathmar Holi here.

F: Huranga Holi at Dauji Temple (30 Km from Mathura) - March 11, 2020. On the day after Holi festival, Dauji Temple, which is outside Mathura city, comes alive with men getting not just beaten up but also stripped by the women. It’s the glorious history of more than 500 years, when the Krishna temple was established. Typically, women from the family which established the temple strip the men off their shirt and beat them up with their own clothes, in the temple courtyard. After the ceremony gets over, there is more Holi played in the courtyard of the temple and everyone is welcome to join in the fest. It is one of the most fun-filled and popular form of Holi. If you want to capture good pictures reach by 9 am and block your seat on the roof to get a good view.

Another most amazing celebration is Widow Holi.

The situation of widows was not so good in India earlier. They cannot wear colourful Saree which is the traditional dress and had to wear only white Saree to differentiate them from the other women. They were often banished from their homes and were forced to live in ashrams in Varanasi and Vrindavan. They wore plain white clothes and never played with colours. A few years back the widows of Pagal Baba Widow Ashram in Vrindavan decided to break this convention and start playing with colors during the Holi Festival. This is the day when they enjoy the colours of life and connect themselves with the divine Lord Krishna. Guests can also meet and play colours with them after getting permission.

Note: If you have time then please ensure to spend 02 days in Mathura and Vrindavan to celebrate this unique festival.

Today post breakfast check out from hotel and drive towards Agra. Enjoy an early morning visit to the World Heritage Site of Taj Mahal (Closed on Fridays). The Taj Mahal, which is one man’s monumental testimony to love, has become synonymous not only with this city, but with all of India. A mausoleum built by Shah Jahan for his empress Mumtaz Mahal, the Taj is the primary attraction of the city. Located close to the Taj Mahal, you’ll now visit the Agra Fort, which lies on the bend of the river Yamuna. Built by Mughal Emperor Akbar over 1565-73 AD, it was successively occupied and added to by Jahangir and Shah Jahan. Later check-in to the hotel. Evening free on leisure or move around the local markets.

Afterwards, head back to the hotel for breakfast and then check-out and drive directly to New Delhi. Upon reaching New Delhi transfer to Delhi Airport to board the flight for your onward journey.