Enjoy a delightful luxurious ride across heritage & commercial halts in India. The journey begins with a visit to the Taj, continues across Ranthambore National Park. Then the voyage goes across the palaces at Pink city, to desert city Bikaner, forts and museums at Jodhpur, to the lake city and takes you to the commercial hub of India — Mumbai. A blend of history, adventure and heritage. Delhi, the national capital is a perfect blend of old world and new age charm. Agra engraved a permanent place in world history, thanks to the iconic Taj Mahal. This white marble mausoleum built by Mughal Emperor Shah Jahan in the memory of his wife Mumtaz Mahal, on the banks of Yamuna — is the ultimate epitome of love. Ranthambore Tiger Reserve in the Rajasthan state of India, comprises distinct areas with varied conservation history and virtually separated geographically with mere narrow corridors linking them to the core, Ranthambore National Park. These are mainly, the Ranthambore National Park, Kailadevi Sanctuary and Sawai Mansingh Sanctuary. Jaipur, the Pink city, is lined with forts and monuments. The City Palace is the most remarkable structure which portrays Mughal and Rajput architecture at its best. Jodhpur, Mehrangarh Fort, Umaid Bhavan Palace and Jaswant Thada are popular forts which give you a taste of ancient Rajputana. What makes the city more interesting is, most buildings and houses here are painted blue! A bird's eye view of Jodhpur will rightly explain why it is branded as the blue city of India. Udaipur, the Lake City, is a favorite of newlyweds. Boating in Lake Pichola, adjoining marble Lake Palace is truly luxurious. Mumbai is a group of seven islands situated on the west coast of India. Over a period of time it has become the commercial capital of the nation, and one of the most populous cities in the world. Although human habitation existed since the Stone Age, the Kolis, a fishing community, were the earliest known settlers of the islands. 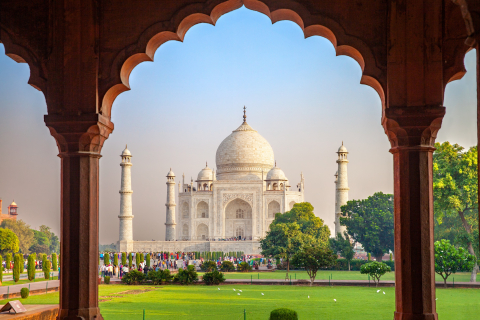 Welcome aboard the Maharajas' Express. This morning, assemble at Delhi Safdarjung station at approximately 0815 hours and complete your registration and check in formalities, a sipping into your welcome drink enjoying the instrumental music. The Maharajas’ Express departs Delhi at 0915 hours for Agra. Enjoy brunch on board as you arrive into Agra. Join us for a session on the train for a Tour Brief and meet your facilitators during this exciting journey. As you reach the ‘City of Mughal Splendour’, visit the world famous Taj Mahal (one of the Seven Wonders of the World), built by the Mughal Emperor Shah Jahan as the mausoleum for his favourite queen Mumtaz Mahal. A UNESCO World Heritage Site, this incomparable marvel is constructed entirely out of white marble and is an architectural masterpiece with beautiful inlay work and marble screens. Return back to the Maharajas’ Express. You may choose optional activities such as spa at a five star hotel or Mohabbat the Taj show or explore the city in your private car with guide. Please contact the Guest Relations Executive for the optional activities.Brunch and Dinner on board. Overnight on the Maharajas’ Express. 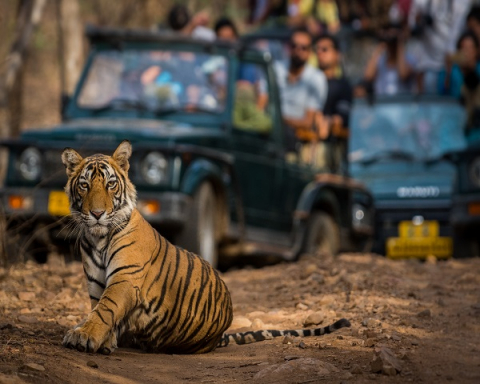 Early this morning, disembark to visit the exquisite Agra Fort. Later, enjoy relaxed breakfast on board as you travel to your next destination Ranthambore. Lunch shall be served onboard. Arrive into Ranthambore and proceed for an exciting game drive in the Ranthambore National Park. Originally the private hunting ground of the Maharajas of Jaipur, Ranthambore was declared a National Park in 1973. The Park is famous for its open sightings of tigers, sambar, chital, nilgai, chinkara, wild boar, sloth bear, hyena, jackal and leopard. The safari cannot be compared to that of Africa and you are indeed fortunate if you spot the elusive tiger or the shy leopard. The safari is carried out in open vehicles and the ride is quite bumpy and dusty. You must carry adequate warm clothes for winter months. Return to the Maharajas’ Express. Dinner onboard as the Maharajas’ Express proceeds for Jaipur. Breakfast, Lunch and Dinner on board. Overnight on the Maharajas’ Express. 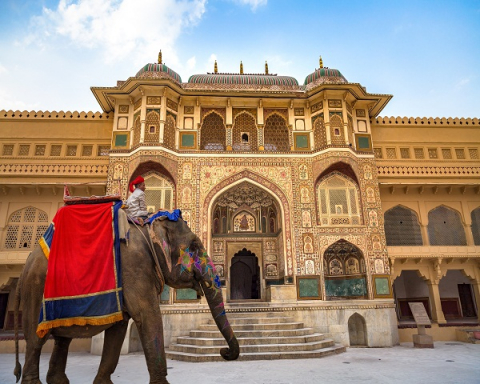 Enjoy a leisurely breakfast on board. Following disembarkation and a grand traditional welcome, begin your exciting tour of the pink city with a visit to Amber Fort at 0830 hrs. The Amber Fort, set in picturesque and rugged hills is a fascinating blend of Hindu and Mughal architecture. Constructed by Raja Man Singh I in 1592 and completed by Mirja Raja Jai Singh, the fort was made in red sand stone and white marble. The rugged forbidding exterior belies an inner paradise with a beautiful fusion of art and architecture. Amber is the classic and romantic fort-palace with a magnificent aura. A short jeep ride takes you up to the fort where you will enjoy a tour of the royal apartments, with striking views of the gorge. Step back into the Mughal era as you enter the Chamber of Mirrors (Sheesh Mahal), and the Hall of Victory. Return back to the train for a leisurely lunch on board. You may also choose to participate in the optional activities such as Spa facilities at a five star hotel or visit the City Palace and Jantar Mantar (The Observatory) or explore the city in your private car with guide. Please contact the Guest Relations Executive for the Optional services. Proceed for an exclusive dinner at the Rambagh Palace Hotel. The Palace built in 1835 AD was the residence of the Maharaja of Jaipur from 1925 to 1957, when it was converted into a luxury hotel. The palace retains its royal splendour, hand-carved marble latticework, and elaborate gardens. Afterwards return to the station by 2100 hours as Maharajas’ Express proceeds for Bikaner. Breakfast and Lunch on board. Dinner at Rambagh Palace Hotel. Overnight on the Maharajas’ Express.

Enjoy your journey through the countryside with breakfast on board. At around 1000 hours, arrive into the desert citadel of Bikaner. You may choose to explore the city on an Optional City Tour. Please contact the Guest Relations Executive for the optional activities. After your optional tours, return to the train for lunch. Following lunch, disembark and proceed to the Junagarh Fort, an unassailable fortress built in 1593 AD by Raja Rai Singh. While the fort is a formidable structure encircled by a moat, its real beauty lies inside. Be overwhelmed by the Diwan-i-Khas, Phool Mahal (Flower Palace), Hawa Mahal, Badal Mahal and Anup Mahal. Later experience the royal pageantry as a convoy of camel carts accompanied by musicians takes you for a Sundowner on the Sand Dunes. Enjoy cocktails, savour traditional mouthwatering barbecue delicacies as you enjoy traditional folk arts like the Langaas and Kalbeliyas. Return to the comforts of your train by 2030 hours and embark on your onward journey to Jodhpur. Breakfast and Lunch on board; Evening barbeque on dunes. Overnight on the Maharajas’ Express. 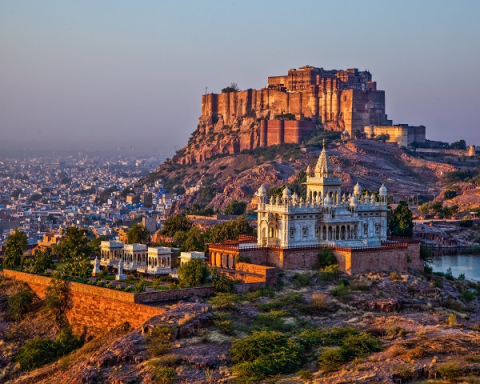 This morning, the Maharajas’ Express, continues her journey into the stronghold of the Marwar region. Enjoy a leisurely breakfast on board. The morning is at leisure on board or you may participate in one of the optional tours to the Bishnoi villages to experience rural India or enjoy spa facilities at a 5 star hotel or Visit to Umaid Bhawan Palace Museum and Jaswant Thada or explore the city in your private car with guide Please contact the Guest Relations Executive for the optional activities. Return to the train for lunch on-board. After lunch visit the magnificent Mehrangarh Fort. Admire the intricate latticed windows, elaborately carved panels and elegantly carved arches followed by a walking tour of the Old Clock Tower Market. As you reach the Market on Tuk Tuks, get a glimpse of the daily lifestyle of the local residents, passing some of the old houses and havelis. Enjoy an exclusive Cocktail evening with a wide array of sumptuous Marwar Culinary delights served at an exclusive venue. Return to the train and continue your journey to picturesque Udaipur. Breakfast and Lunch on board; Cocktail dinner at Hanwant Mahal/Khaas Bagh. Overnight on the Maharajas’ Express. 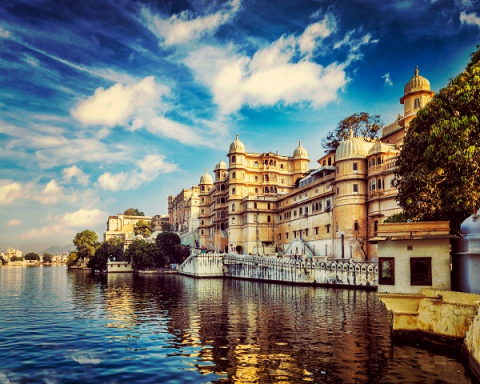 This morning you will wake up in the picturesque region of Mewar, one of the most popular and royal states of the Rajputana. Admire the magnificent landscape of the Aravali Hills over a leisurely breakfast as you arrive into Udaipur - the City of Lakes. Disembark the train at 1000 hours as you begin your visit with a boat ride on Lake Pichola. Following the boat ride, visit the City Palace, the largest palace complex in Rajasthan, with its scalloped arches, fretted balconies, and cupolas. Visit Mor Chowk and see its lavish mosaics of peacocks; Moti Mahal with beautiful mirror work; Chini Mahal covered in ornamental tiles and the spectacular Zenana Mahal. Visit The Crystal Gallery and the Darbar Hall with an audio guide. Feel like a king as you experience the hospitality at the Satkar Hall of Fateh Prakash Palace reminiscent of the ancient Mewar glory. Feast your taste buds over a spread of Indian cuisine. Following lunch return to the train for a relaxed afternoon on board as train proceeds for Mumbai. Enjoy an ‘Indian Evening’ on board, raising a toast to a memorable experience. Breakfast on board; Lunch in Satkar Hall of Fateh Prakash Palace; Dinner on board. Overnight on the Maharajas’ Express.

Enjoy relaxed morning on board, you will disembark at around 1545 hours at Chatrapati Shivaji MaharajTerminus(CSMT) in the financial capital city of Mumbai. Bid farewell to the Maharajas' Express as your ‘The Indian Splendour’ journey comes to an end. The royal journey is over, but the memory of which, will live on forever! Breakfast and Lunch on the Maharajas’ Express.