Golden Triangle is the most popular and visited circuit of India that covers Delhi, Agra and Jaipur. This circuit reflects the grandeur, glory & history of the nation in true sense. While discovering the Golden Triangle circuit of India, you get an opportunity to explore the incredible wilderness of Ranthambore via jeep safaris accompanied by a naturalist. Ranthambore has one of the renowned wildlife sanctuaries known for the maximum number of tiger spotting. Spotting a tiger here is definitely going to give you goosebumps.

Welcome to Delhi, the capital city of India. Our representative will receive you at the airport and transfer you to the hotel. Relax and spend the rest of the day at leisure. New Delhi, the capital of India, is a fusion of the ancient and the modern. Comprising of two contrasting yet harmonious parts, the Old Delhi and New Delhi, the city is a travel hub of Northern India, deeply steeped in history, art and culture. 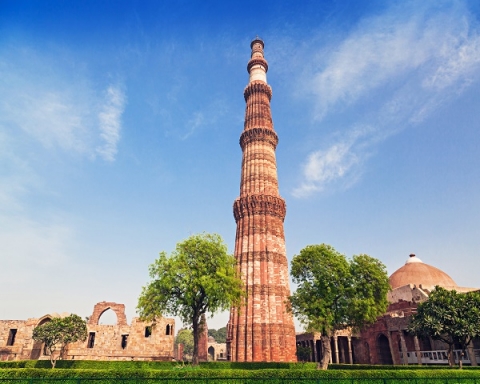 After breakfast, set out on a sightseeing tour of Delhi city. You’ll first go for Old Delhi sightseeing, starting with Jama Masjid, the country's largest mosque, built-in 1656. The mosque's courtyard is capable of holding 25,000 devotees at once. Next, visit Old Delhi’s oldest and biggest market Chandni Chowk. Later, enjoy a rickshaw ride from Fatehpuri Masjid to the impressive red sandstone monument of Red Fort, a UNESCO World Heritage Site. Here, our driver will pick you up and drive you to Raj Ghat, the cremation site of Mahatma Gandhi - Father of the Nation. Afterward, proceed to Humayun’s Tomb (a UNESCO World Heritage Site), an early example of fine Mughal architecture in India, built-in 1565. Humayun's Tomb is often said to be the inspiration behind the Taj Mahal.

Later, take a sightseeing tour of New Delhi and drive past Rashtrapati Bhawan (President’s House), Parliament House, and India Gate - a war memorial constructed in memory of 70,000 Indian soldiers who fought in World War I. Lastly, visit Qutub Minar (a UNESCO World Heritage Site), a soaring tower of victory. Its construction was commenced in 1193 under the supervision of Islamic ruler Qutub-ud-din-Aibak, immediately after the defeat of the last Hindu Kingdom in Delhi. The marble and red sandstone built structure is nearly 73 meters tall and tapers from a 15-meter-diameter base to just 2.5 meters at the top.

After breakfast, you will be driven towards Agra via one of India’s finest freeways. Upon arrival in Agra, check into the hotel and freshen up. The city of Agra is home to Taj Mahal-the UNESCO World Heritage Site and perhaps the world’s most photographed monument. Pay a visit to this beautiful edifice commissioned in the 17th century by the Mughal Emperor Shah Jahan in memory of his loving wife. Then, visit the massive Agra Fort (a UNESCO World Heritage Site), an elegant building that reflects a perfect fusion of the Hindu and Central Asian architectural styles with massive courtyards, mosques & private chambers. Next, visit the Mehtab Bagh, an extension of the Taj Mahal Garden, located on the other side of the river.

After breakfast, drive to Ranthambore. En-route, visit Fatehpur Sikri, via Fatehpur Sikri (a UNESCO World Heritage Site). Built-in the 16th century, this ancient fortified city was once the capital of the Mughal Empire. The complex includes Diwan-i-Khas building, which has a beautifully carved pillar at its centre and the Panch Mahal Palace. On reaching Ranthambore, check-in at the hotel. Ranthambore also called the Abode of Tigers is renowned as one of the few places that offer the highest number of Bengal Tiger sightings. Located in Sawai Madhopur, it also offers deep insights into the traditional village life of Rajasthan. Day free at leisure or you can also visit the Rajiv Gandhi Regional Museum of Natural History or walk-through the small villages of Rajasthan to see its traditional culture and traditions. 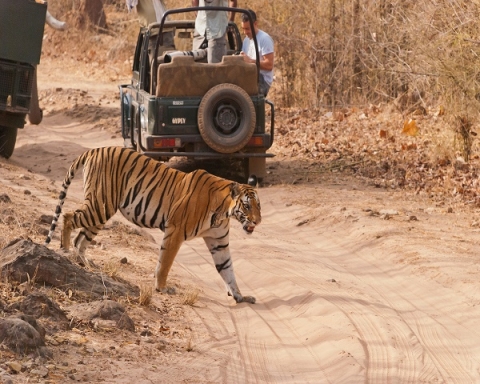 The Ranthambore National Park is a wide expanse of wilderness in Ranthambore. It is a favored spot for avid travelers and photography enthusiasts. It is renowned as one of the topmost places in India with the highest number of Bengal tiger spotting. It also comprises of a year-old Ranthambore Fort, overlooking the entire sanctuary. Head for an early morning Ranthambore Wildlife safari where you will soak in the natural beauty and rich wildlife including Leopards, Jackals, Gazelle, Boars, etc. - especially Tigers. As per the 2014 census, there are about 62 tigers present here. Also, watch animals moving around freely around the lake in this national park. After a thrilling safari ride, return to the hotel. Settle in for breakfast and relax for some time. Later in the afternoon proceed for a safari to Ranthambore National Park and continue exploring this natural habitat of various wild animals.

Have breakfast in the morning and later, check-out from the hotel and drive to Jaipur. Jaipur is a city known as the Pink City of India due to the extensive use of pink sandstone in various buildings of the city. Its monuments showcase a myriad of architectural styles and its vibrant bazaars are famous for traditional handicrafts and jewelry. The ambiance of this city speaks volumes of the rich lifestyle of the Rajput Kings. Upon arrival at Jaipur, you will check-in at the hotel and spend the rest of the day at leisure.

After breakfast, head for Jaipur sightseeing. Visit the Amer Fort dating back to the 16th century that displays private halls, pavilions, former private chambers of the King and royal Rajput women. The reflection of this fort falling on the Maota Lake is truly captivating. Enjoy an Elephant ride here. Explore the City Palace consisting of former private and public chambers, silver vessels, courtyards, gateways, private chambers of the King and lot more. Later in the day, head to Jantar Mantar. It is an astronomical observatory that features the World’s largest Sundial - Samrat Yantra. Visit the Hawa Mahal - a five-storey palace built-in 1799 during the Rajput rule. It is popularly known for its intricately-designed 953 windows adorned with spectacular latticework. Rest of the day is kept free to visit the famous Markets of Textiles, Gems, Carpets, and handicrafts. You can also shop for some souvenirs.

After breakfast, our company representative will transfer you to Delhi Airport to board your flight back home.