Discover a mix of standout spiritual sights in the vibrant, walled district of Old Delhi—one-time capital of the Mughal Empire—during this in-depth guided tour. Hotel pickup is included, so you won’t have to navigate the narrow, bustling lanes on your own. Visit the oldest Jain temple in Delhi—home to a famous bird hospital—and two centuries-old mosques, with time to explore Asia’s largest wholesale spice market.

This 4.5 hour Old Delhi heritage and spiritual tour begins with pickup at 09:00 AM at your hotel and then you will proceed with a drive to Old Delhi, a walled city of Delhi. This tour takes you through various attractions in Chandni Chowk – one of the oldest and busiest markets of Old Delhi. The first destination is Jain Digambara Temple, the oldest Jain temple in Delhi dating back to the Mughal era (1526-1828). Also known as Lal Mandir, this temple is dedicated to Mahavira (the 24th 'Tirthankara' of the Jains) and Parsavanath (23rd Tiranthakara of Jainism). A special feature of this temple complex is that it has a bird hospital with hos[itality wards for a variety of birds, which are released post treatment.

Your Old Delhi sightseeing tour now proceeds with Ballimaran (Ghalib ki Haveli). It was home to “Mirza Ghalib” (a legend of Urdu poetry) who stayed here for a long time. This haveli was acquired by the government after the decease of Mirza Ghalib and was turned into a museum dedicated to Mirza Ghalib. Next, you will visit the Gurudwara Sis Ganj Sahib built in 1783. This is a Gurudwara cum memorial to pay homahe to the demise of Guru Tegh Bahadur (9th Sikh Guru). As per folklore, Guru Tegh Bahadur’s head was chopped off on the order of Aurangzeb (a Mughal emperor), when he opposed changing his religion from Hindu to Islam.

Later, your Old Delhi rickshaw ride heads to Fatehpuri Masjid – a 17th century holy shrine of Muslims built from red sandstone. This monument has been a silent observer of the historical events during the Mughal and British rule. It is named after its creator “Fatehpuri Begum”, one of the wives of Shahjahan (a Mughal emperor).

Before visiting the final destination - Jama Masjid, you will visit the Asia’s biggest wholesale spice market known as Khari Baoli. This high-spirited market came into existence in 1650. It was a former step well with salty water that was used for bathing purpose and for animals. Now it’s a popular marketplace, especially for photography enthusiasts and historyy buffs, that spells history of its time and its ambiance has magnetism of its own. The rich, vibrant spices displayed in heaps and the spicy aroma of this market, is something that excites every visitor here. Now your tour ends with visit to Jama Masjid, also called Masjid-i Jah?n-Num? (meaning World-reflecting Mosque), that dates back to 350 years. It is the largest mosque in India built by the 5th Mughal Emperor “ShahJahan” – who was the founder of the modern city of Delhi known as “Shahjahanabad”, which is now called Old Delhi. This mosque attracts a huge number of devotees on the occasion of Id-ul-Fitr (religious festival of Muslims). After an exciting spiritual Old Delhi heritage tour, you will return to the hotel. Rest of the day at leisure. 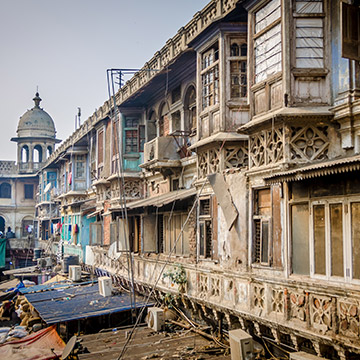