Plan your own Sightseeing Tour in Amritsar with Guide & Transport

On this custom tour, discover the wonderful city of Amritsar. Visit seven of the famous highlights of the city including the Golden Temple, Jallianwala Bagh, Akal Takht, Durgiana Temple, and Gobindgarh Fort among others. Also, enjoy a visit to the partition museum and enjoy the Beating Retreat ceremony at Wagah Border, the Indian-Pakistan border. Choose seven of the famous attractions and start your tour right away.

Day 1: Plan your own Sightseeing Tour in Amritsar with Guide & Transport

Get ready to explore the city of Amritsar on this custom city tour with your private guide. Choose seven of the famous attractions of the city and start your tour right away. Golden Temple - Harmandir Sahib, famously known as the Golden Temple is the most sacred place for Sikhs in the world. Golden Temple is considered Amritsar’s soul around which the whole city flourishes. Visit the Golden Temple Museum and understand the rich history of Sikhism and its establishment in India. Let your guide narrate you the legend behind the rise of this valiant religion in the city of Amritsar. Walk to the Langar (mass-dinner) hall and witness extreme devotion and compassion of the people cooking and serving. The temple kitchen serves food non-stop for 12 hours, feeding over 100,000 people in a day. Visit the mega kitchen and learn from your guide how volunteers have to wait for their turn to work in the temples kitchen for months and sometimes years.

Located inside the Golden temple, the Akal Takht, meaning the throne of the timeless one, is the highest seat of the earthly authority of the Khalsa. It was built by Guru Hargobind as a place of justice.

The Partition Museum is a public museum in the town hall in Amritsar. Here you can get to know the history of the partition of British India and explore the museum that houses repository of stories, materials, and documents related to the partition.

A legendary site the Jalliawala Bagh is the exact spot where thousands of innocent Sikh people were killed on the orders of General Reginald Dyer in 1919 on the day of major Sikh festival in Baisakhi. The wall with bullet marks are still standing, screaming the history. Let your guide explain you about the massacre and how the event changed the course of history.

The Durgiana Temple, also known as Lakshmi Narayan Temple, is a Hindu temple in the city of Amritsar, with an architecture resembling that of the Golden temple. The temple worships Goddess Durga as the chief deity; however, idols of Goddess Lakshmi and Lord Vishnu are also worshipped within the temple complex.

Statue Stop at the Rambagh Garden for a photo opportunity with Maharaja Ranjit Singh’s glorious statue, saddled on his horse proudly looking towards the horizon. Capture some good pictures beside the statue, which is a symbol of the Sikh power during the 18th century.

Built in the 18th century by the local chieftain of the region, the Gobindgarh Fort is a historic fort renamed after the 10th Sikh guru, Guru Gobind Singh. The Fort is a live museum featuring exhibitions of Sikh history, a coin museum, which once stored the Kohinoor diamond, a warfare museum, food shops, and bazaars etc. 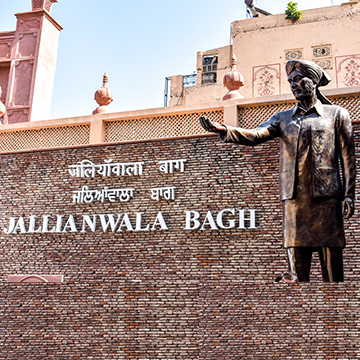