Plan your own Sightseeing Tour in Jaipur with Guide & Transport

On this tour, spend your day in Jaipur- a UNESCO World Heritage Site in your own style by visiting eight of the famous attractions, you are in love with the most. Travel like a local within the comfort of your own private AC vehicle with your knowledgeable guide. Discover the famous attractions of Jaipur, including the famous palaces, forts & temples. Sightseeing List [ Amber Fort, Jaigarh Fort,Nahargarh Fort,Jantar Mantar,Hawa Mahal,City Palace,Laxmi Narayan Temple,Monkey Temple,Albert Hall Museum,Jal Mahal ] (You can select 08 sightseeing places - Please inform to your guide during pick up time. Accordingly He/She will take you for the full day city tour)

Day 1: Plan your own Sightseeing Tour in Jaipur with Guide & Transport

Amber Fort On this custom sightseeing tour, discover the city of UNESCO World Heritage Site – the city of Jaipur, in your own style. Pay a visit to eight of the most famous attractions and get to know the city like a local. Visit amber fort (a UNESCO World Heritage Site). Get to know the dramatic grandeur of the fort perched on the Aravalli Hills and surrounded by fortified battlements.

Jaigarh Fort – Located on the promontory, called the Hill of eagles (Cheel ka Teela) of the Aravalli range, the Jaigarh fort overlooks the Amer Fort & the Maota Lake. It was built in the 18th-century by Jai Singh II to protect Amer fort and its palace complex. The rugged fort is also known as Victory fort and features cannon named “jaivana”, which was manufactured in its precincts and was then the world’s largest cannon on wheels.

Nahargarh Fort – The Nahargarh Fort, meaning the abode of the tigers once formed a strong defense ring of the city of Jaipur, along with the Amer Fort and Jaigarh Fort. The fort was initially constructed as a place of retreat in the 18th century by Maharaja Sawai Jai Singh

City Palace of Jaipur – The City Palace was the former residence of Jai Singh II and continues to be the home of the Royal family of Jaipur. The royal palace complex features buildings, palaces, galleries, temples, garden, courtyards, restaurants, and the museum trust’s offices.

Laxmi Narayan Temple – Also known as Birla temple, the Laxmi Narayan temple is a famous Hindu temple made in honor of Lord Laxminarayan. Built in between 1933 and 1939, the temple features a garden with sculptures, Geeta Bhawan, and shrines dedicated to Lord Shiva, Krishna & Buddha.

Monkey Temple Galtaji Temple (Monkey Temple) – Situated in the city of Khania Balaji, the Galtaji Temple is a famous Hindu pilgrimage spot. Apart from the nearby temples, the natural spring at the temple that flows downward from the top of the hill, is the most famous attraction of the place. The water from the spring fills up the sacred water tanks (kunds) located here. The temple comprises seven holy kunds, out of which the Galta Kund is the most significant one.

Jal Mahal - Also, enjoy a photo opportunity at the Jal Mahal, meaning the “Water Palace”. Located in the middle of the Man Sagar Lake, the Palace was built in Rajputana style of architecture. 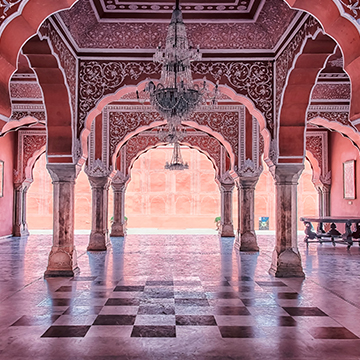