Plan your own Sightseeing Tour in Mumbai with Guide & Transport

Get to discover Mumbai – the city of dreams and also the commercial capital of the country. With our customized tour, get the freedom to explore your favourite eight attractions of Mumbai and take home an experience that will remain etched in your memory forever.

• Explore your favourite attractions in Mumbai

• Get to know the history of the Gateway of India

• Explore the Historic Sites of Mumbai

• Plan your own itinerary just the way you want

• Discover eight of the famous attractions of the city

Day 1: Plan your own Sightseeing Tour in Mumbai with Guide & Transport

Gateway of India On this customized tour, get ready to explore the most famous attractions of the city in total style & comfort. Pick out eight of your favourite attractions and start your tour right away: Gateway of India - Spend time clicking photographs and learning about the history of one of Mumbai’s prime landmarks – the Gateway of India. Built in 1924, it honours King George V and Queen Mary's visit to India in 1911.

Mani Bhavan (National Gandhi Museum) – A museum and historical building dedicated to Mahatma Gandhi, the Mani Bhawan was the leader’s residence for about 17 years, from 1917 to 1934 and is one of the most famous attractions of the city.

Dadabbawala (Monday to Friday) (Photo opportunity) - Get a chance to capture some great photos with the Dabbawalas – the lunch-pail men who deliver home-cooked food from people's homes to their workplaces, and have been a topic of study & analysis at top business schools like IIM-A and Harvard.

Marine Drive - Queen’s necklace (Drive) - The Marine Drive is the heart and soul of Mumbai stretched across the coast of Arabian Sea. Capture the beauty of the Marine Drive at night, when it lights up and looks like a dazzling necklace.

Bandra-Worli Sea Link (Drive) - An architectural wonder, the Bandra-Worli Sea Link is a 5.6km cable-stayed bridge which crosses the Arabian Sea and links the Mumbai suburbs with South Mumbai. This 250-million-dollar bridge is considered an engineering marvel and the drive is totally a must.

Siddhivinayak Mandir - One of Mumbai’s most revered attractions, the Siddhivinayak Temple is an 18th-century temple made in honour of the elephant-head deity, Lord Ganesha. During the evening Aarti ceremony, the devotees sing hymns for God Ganesha and prays for their health and happiness.

Mahalakshmi Temple – Built in 1831 by Dhakji Dadaji, the Mahalakshmi temple is made in honour of Devi Mahalakshmi, the central deity of Devi Mahatmyam (a religious Hindu text). The temple enshrines the Tridevi goddesses Mahakali, Mahalakshmi, and Mahasaraswati.

Chowpatty Beach – The Chowpatty Beach is one of the most famous and highly visited beaches of Mumbai. It is a great spot to enjoy the sunset views and capture the beauty of the sea, adorned by the long stretch of white sand.

Bollywood Celebrity’s House (Photo Opportunity) – Get escorted to Juhu and Bandra to catch glimpses of the houses of some famous Film Stars (from outside) and make sure to click some good pictures. 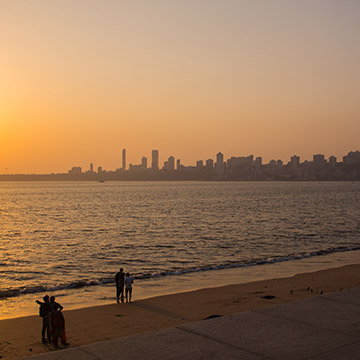