Pick up from : City Center Hotel

On this tour, embark on an enlightening journey in Amritsar, Punjab. Get a chance to visit the famous highlights of the city including the Golden Temple; Jallianwala Bagh- a memorial made in honor of the victims of the Jallianwala Bagh massacre. Also, enjoy a visit to the partition museum and then proceed for the Beating Retreat ceremony at Wagah Border, the Indian-Pakistan border. 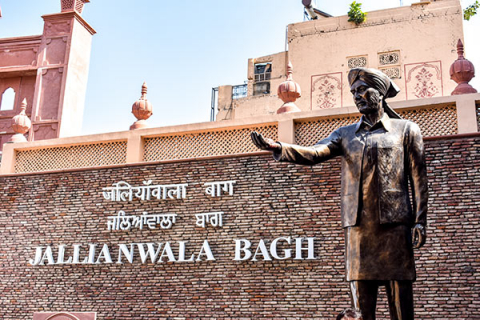 Your tour starts with a pick up from the hotel. You will be then driven for Amritsar sightseeing tour. Visit the Golden Temple, also known as Sri Harmandir Sahib (abode of God) or Darbar Sahib. It is the most important Sikh pilgrimage site and the holiest gurudwara among the entire Sikh community. The Golden Temple is built around a sarovar (man-made pool), that was completed in 1577 by Guru Ram Das Ji (the fourth Sikh Guru). In 1589, the foundation stone of the temple was laid by a Muslim Pir of Lahore – Sai Mian Mir on the request of Guru Arjan Dev Ji – the fifth Sikh Guru. In 1604, a copy of the Adi Granth was placed in Harmandir Sahib by Guru Arjan Dev Ji, calling the site Ath Sath Tirath (meaning, "shrine of 68 pilgrimages").

Also, visit the Jallianwala Bagh – the site where the Amritsar massacre took place on 13 April 1919 when the British Army troops in India fired at a crowd of Indians, who had gathered in Jallianwala Bagh, for a peaceful protest.

Also, visit the Partition Museum, a public museum in the town hall in Amritsar. Here you can get to know the history of the partition of British India and explore the museum that houses a repository of stories, materials, and documents related to the partition.

In the evening you will be driven towards the Wagah Border for beating retreat ceremony. Witness the Flag down ceremony performed at the border between Indian and Pakistan as the border policemen march to the beats of the drum. Post the ceremony, you will be transferred back to the hotel.