Explore some of the city’s most noteworthy attractions on this private sightseeing tour of New and Old Delhi. Your expert guide will highlight aspects of the diverse culture and rich history in this full-day experience. Visit the Humayun’s Tomb and Qutub Minar - two of Delhi’s most famous and designated UNESCO World Heritage Sites. Wander through the lanes of Chandani Chowk and explore Delhi, driving past two of the city’s famous highlights India Gate and Rashtrapati Bhawan.

Qutub Minar Your tour starts with a pick up from the hotel. As part of the sightseeing tour, you will explore some of the famous attractions of the city, including two UNESCO World Heritage Sites. Visit the UNESCO World-Heritage-listed Qutub Minar. Its towering spire stands some 238 feet (73 meters) making it the tallest minaret in all of India.

Humayun's Tomb Also, visit the magnificent Humayun’s Tomb, a UNESCO World Heritage Site. Built in 1565 C.E, the Mughal marvel was built by Queen Haji Begum in the 16th century, Humayun’s widow. Learn about the marvelous Mughal edifice from your guide.

Walk past the Chandni Chowk area and witness the glory that Mughals left behind. The streets of Chandni Chowk need no introduction. This part of Delhi is known not just around the country, but around the world, and with good reason, too—the charm of the place is certainly unmatchable. You will visit Spice Market, Temple, Kinari Bazar.

India Gate During the sightseeing tour, you will drive past two of the famous monuments of New Delhi, i.e., India Gate and Rashtrapati Bhawan. As your tour ends, you will be transferred back to the hotel. 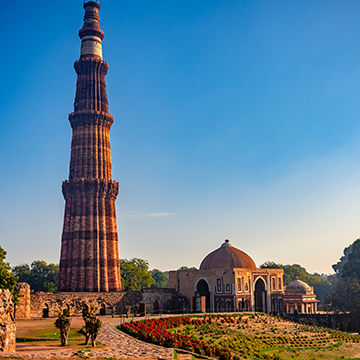