On this 8-hour sightseeing excursion, explore the historic city of Hyderabad. Get a taste of the city’s architecture, shopping, culture, and amazing history. Pay a visit to the notable city landmarks such as the massive Golconda Fort, Qutub Shahi Tombs, Salarjung Museum, and the iconic Charminar, before spending the afternoon browsing local bazaars for some colourful souvenirs and traditional items. Also, pay a visit to the Chowmahalla Palace – a 18th century palace complex.

• Explore the iconic landmark of Hyderabad

• Visit Hyderabad's top attractions and landmarks in a single day

• Shop at the local bazaars for some souvenirs

Your tour starts with a pick up from the hotel. You will be then driven towards the Golconda fort. Also known as Round Shaped hill or Shepherds' Hill, Golconda Fort is a citadel and fort that once served as the capital of the medieval sultanate of the Qutb Shahi dynasty. The Fort used to have a vault that once stored the Koh-i-Noor and Hope Diamonds, along with other precious diamonds. The Golconda Fort along with the Qutb Shahi dynasty Monuments of Hyderabad (the Charminar and the Qutb Shahi Tombs) is on UNESCO’s Tentative World Heritage Site List.

Next, head towards the Qutub Shahi tombs, located close to the Golconda Fort. The Qutub Shahi tombs contain the tombs and mosques built by various rulers of the Qutub Shahi dynasty, which is also the resting place of the Golconda Emperors. Laid beautifully among the sprawling gardens, the tombs are worth a visit. The Hindu, Persian and Pathani style of architecture add to the grandeur of the tombs. The corridors of these tombs are famous for their Indo-Saracenic architecture.

Later, proceed to the Salarjung Museum – one of the three National Museums of India and also one of the world’s largest. It has a collection of sculptures, paintings, carvings, textiles, manuscripts, ceramics, metallic artifacts, carpets, and furniture from different parts of the world. The two-storied museum features 38 galleries that display original collections of the royal family.

The, visit the iconic Charminar (Four Minarets)- a masterpiece of the Qutub Shahi Architecture of 1591. It is designated Monument of National Importance under UNESCO's Tentative List. Char Minar is a square structure, with four grand arches each facing and opening into four streets. At each corner stands an exquisitely shaped 56 metres (approx.) high minaret. Then, head to the nearby bazaar. Walking through the streets around Charminar, you will reach the local bazaars, known for its jewelry, pearls, and other accessories. Browse the market for some colourful creations or souvenirs.

Afterwards, proceed to the Chowmahalla Palace. Built in the 18th century, the palace once served as the seat of the royal Nizams of Hyderabad. Built in neo-classical style, the palace is a unique blend of various architectural styles and influences, such as its Mughal domes and Persian-influenced stucco work. One of the buildings within Chowmahalla Palace also functions as an exclusive royal car museum. The historical palace has two courtyards, which consists of grand palaces, stunning chandeliers, intricate carvings on the walls and ceilings, gardens with fountains, and a clock tower. After the tour, you will be driven back to the hotel. 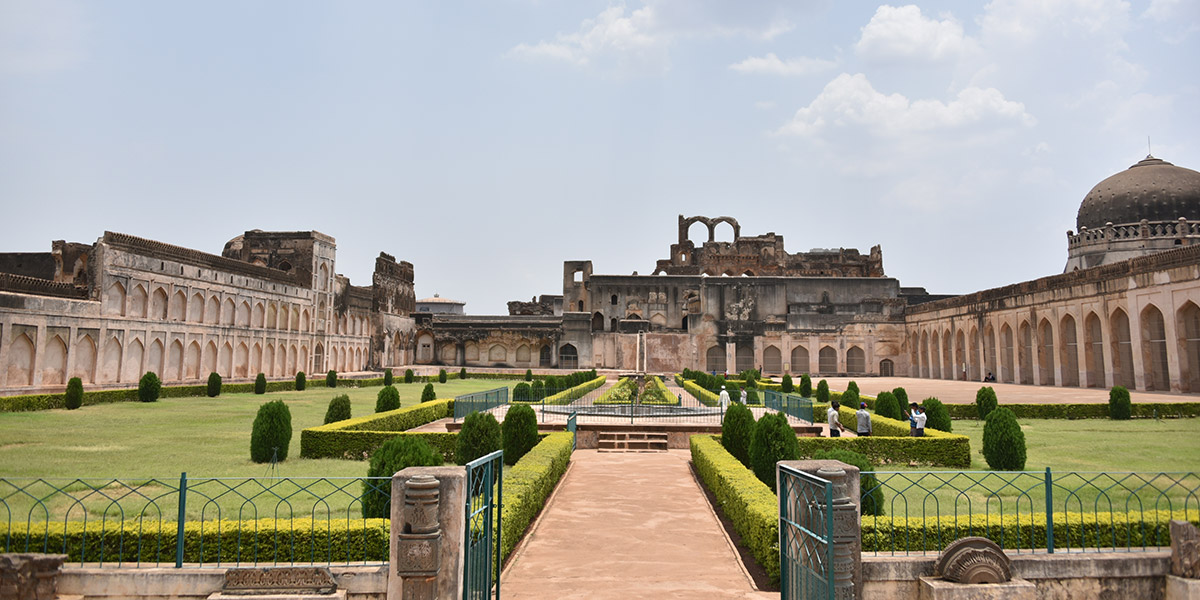