Sedate your senses by visiting two of the UNESCO Sites in Agra, the impressive Taj Mahal and the majestic Agra Fort. Get your soul pumped up as you hop on this tour from the capital city Delhi to the Mughal city of Agra. As you arrive in the city after a joyful train ride, you can delve into the fascinating history of the royals with a local guide, along with a hassle-free transport to various attractions with a private driver. Explore Taj Mahal, Agra Fort, Itmad-Ud-Daulah (Baby Taj), and Mehtab Bagh and get spell bounded by the architectural beauty of these iconic attractions before returning to Delhi in the evening.

Your same day tour will begin from New Delhi. Around 06:30 AM, the driver will pick you up from your hotel anywhere in Delhi, Noida or Gurugram. After pick up, you will be dropped at Nizammuddin Railway Station. The AC train will depart from Delhi at 08:00 AM and will reach Agra at 09:50 AM. On arrival at Agra Railway Station, you will meet our local guide. The guide will take you on a tour to the majestic UNESCO World Heritage Site, Taj Mahal. This is a beautiful edifice which was commissioned in the 17th century by the Mughal Emperor Shah Jahan in memory of his loving wife

Later, you will visit the 16th century Agra Fort; it is a majestic red stone structure which was built by Akbar, the Great Mughal emperor. This elegant building reflects a perfect fusion of the Hindu and Central Asian architectural styles with massive courtyards, mosques and private chambers. This is one of the UNESCO heritage sites with several palaces inside the complex such as Diwan-e-Aam, Jahangiri Mahal, Pearl Mosque and many others.

You will continue the sightseeing tour and visit Itimad-Ud-Daulah. This attraction is often described as a Jewel Box and also called Baby Taj because of its similarity to the Taj Mahal.

visit the Mehtab Bagh, an extension of the Taj Mahal Garden located on the other side of the river. Enjoy the beautiful sunset and capture the beauty of the Taj Mahal from a different angle. Later in the evening, you will be driven to Agra Railway Station at 05:00 PM to board your train to New Delhi. The train will leave from Agra Railway Station at 05:50 PM. You will arrive at New Delhi Railway Station at 07:30 PM and meet our representative who will be waiting for you in front of the train coach. You will be escorted to the hotel or any preferred location anywhere across Delhi, Noida and Gurugram. 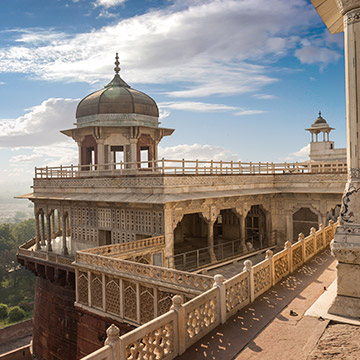